The history of A. Ponchielli Theatre

The current A. Ponchielli Theatre building is the result of a series of building, rebuilding, changes, maintenance and renovation that lasted for two hundred-fifty years. Two are, substantially, the forms the Theatre had in its long history: the first one, which dates back to the XVIII century and the actual one, since 1808.

The history starts in 1747, when a group of nobles decided to equip the city with a true theatre, in place of the rooms, in some way temporary, and vanished anyway, that came first.
The design task was entrusted to Giovanni Battista Zaist, a famous Cremona architect.
Nazari’s theatre, from the owner’s name, changed its name in 1785 when bought from Palchettisti (Box-holders), in “Teatro della società” (Society theatre) or of “Nobile Associazioni” (Noble associations).

That first construction was destroyed in 1806 by a fire, as often happened in XVIII century theatres, built with wood; the resident decided on the immediate reconstruction, entrusting the project to the most known theatre architect of the moment, Luigi Canonica, that took inspiration from his teacher, Piermarini, but with several original approaches.

In this way it was built one of the best theatres at the time, with a u-shaped room, four orders of boxes and a gallery, named Teatro della Concordia, which was added, at the beginning of our century, the name of the best Cremona’s opera composer, Amilcare Ponchielli. Furthermore, starting from that moment, some improvements were made, like the stage extension, which made it one of the biggest in Italy. In 1824 a new fire partially destroyed the building, immediately refurbished by Faustino Rodi and Luigi Voghera.
Acquired from the municipality property in 1986, since 1989 the Ponchielli has been submitted to radical renovation, refurbishment, adjustment and technological upgrade intervention.
Since 2003 the management is entrusted to a Foundation. 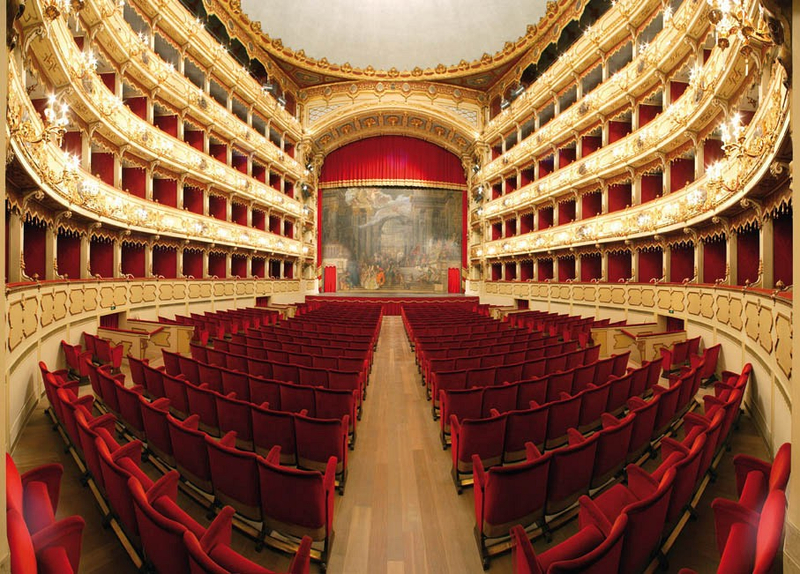 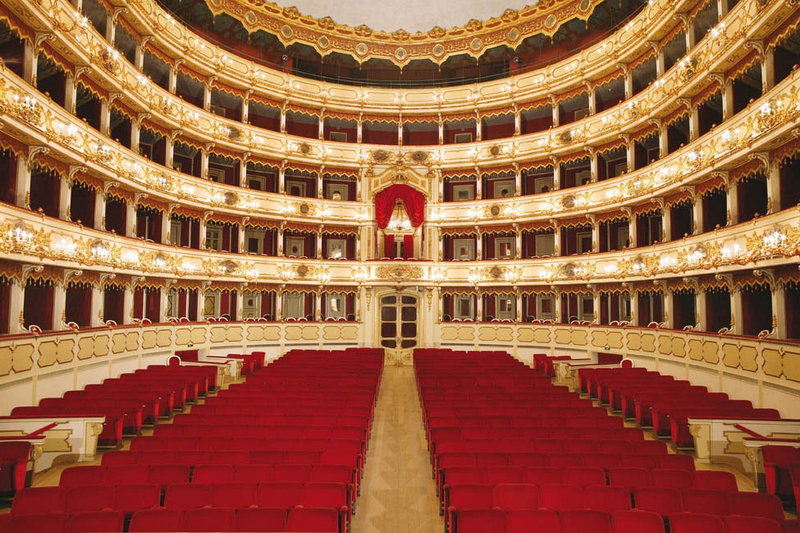 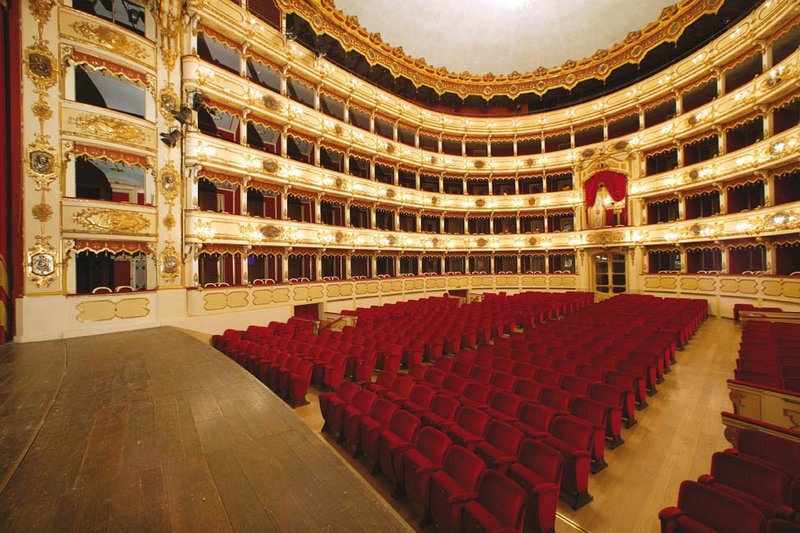 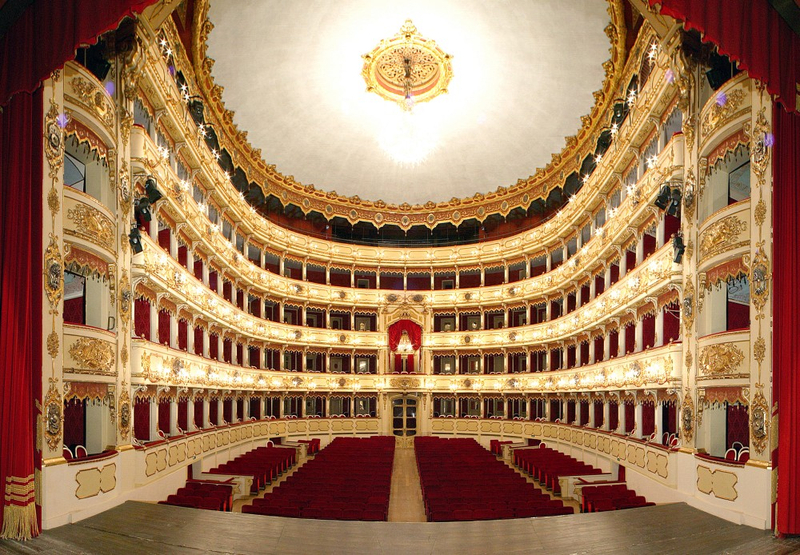 Visits to the Theatre are possible both for individuals and for organized groups,
according to the current artistic activity (performances and rehearsals).
Reservations must be forwarded to the Theatre secretariat,
tel. 0372.022006 or info@teatroponchielli.it
The price of the ticket is € 5.00 (full price), € 3.00 (reduced price).

It’s a wood beam structure placed just behind the stage’s ceiling and of the same stage’s dimension. The A. Ponchielli Theatre’s timber frame is 20 meters to 20 as well, placed at 16 meters above the stage. The structure is all original (dates back to early ‘800) and periodically submitted to maintenance.
The timber frame is the heart of the scene and from there the technicians arrange lights, backstages… a charming and full of history place!

The A. Ponchielli Theatre was one of the first Italian Theatres equipped with electricity. Its majestic chandelier has 80 light bulbs and the maintenance is periodically done, through a particular system still made manually: the chandelier is lit in a dome, thanks to a pulley, there cleaned and inspected by the theatre’s technician.
Once restored, it’s lowered in the room to light up the nights! In 2022 the Theatre was involved in an important technological renovation, with the employment of Led technologies.

A “jewel” of the Theatre is for sure the historical clock. The theatre’s clock dates back to early ‘800, it’s still functioning and it’s possible to see it in action from the stalls during the performances.
But do you know how it works? Its charge’s still manual and its mechanism is rather particular: the beat time is regulated thanks to the counterweight of a stone (still the original one) that weighs about 20 kilos. The clock has an autonomy of 12 hours and when the weight touches the ground it stops. A theatre technician takes care to charge it every show night!

The A. Ponchielli Theatre guards one of the most beautiful historical curtains ever.
The “Sipario Rizzi” was made by Cremona’s painter in 1891 and painted on oil on canvas. The impotent dimensions of seven for eleven meters, contain the representation of “L’allegoria della Storia della Musica”. The curtain is used during some Concert season shows, so the audience can enjoy it. 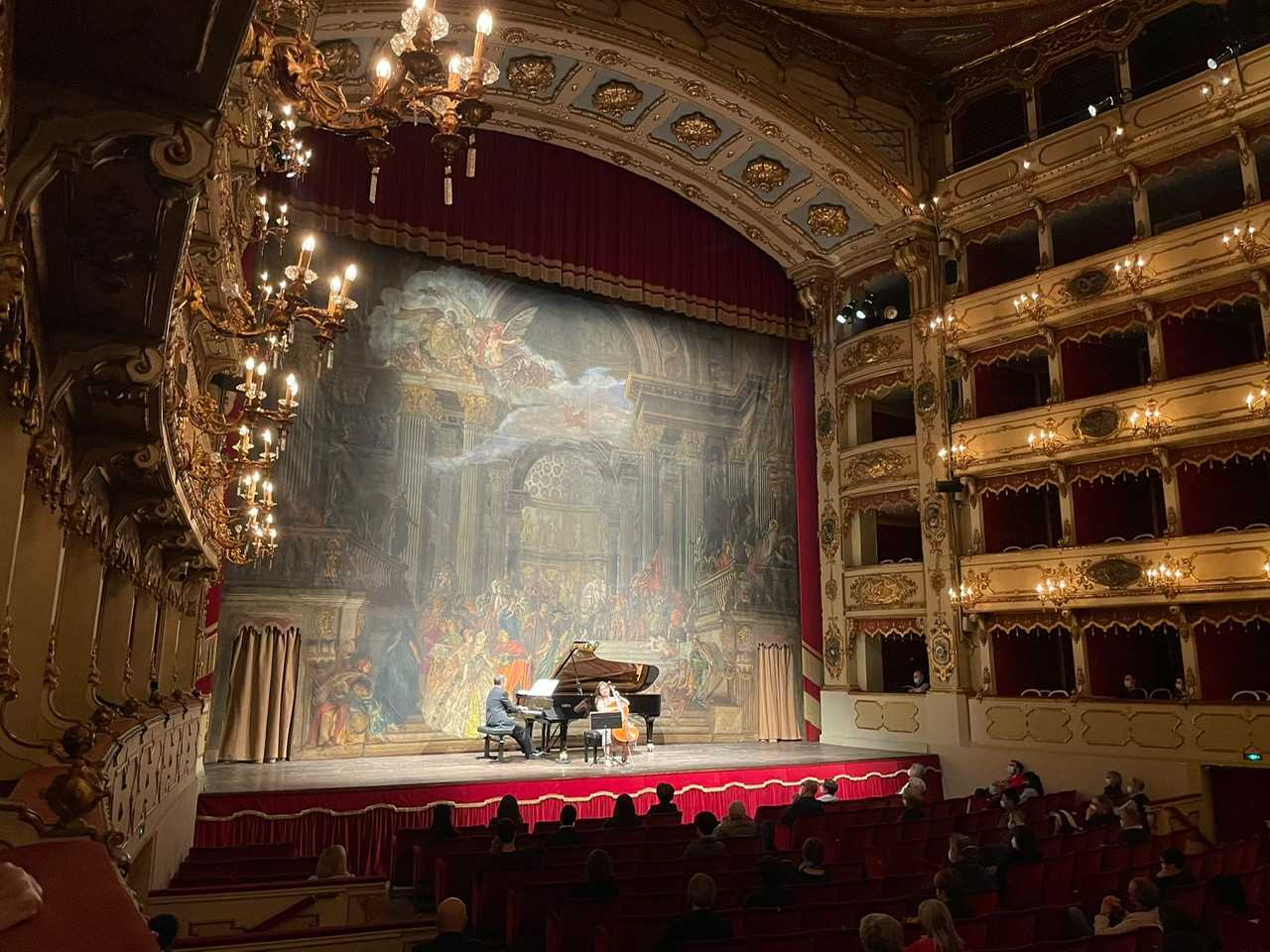 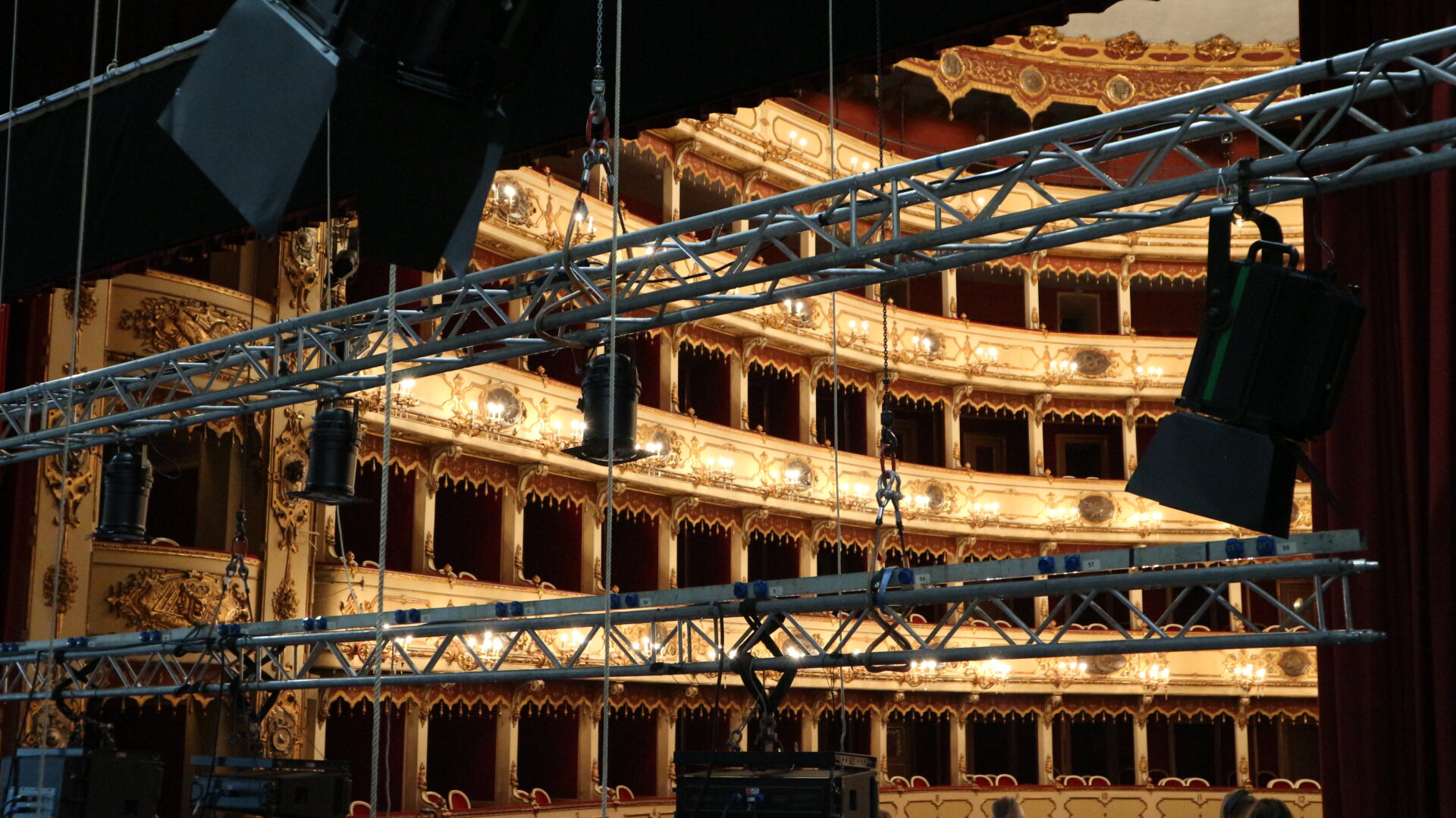 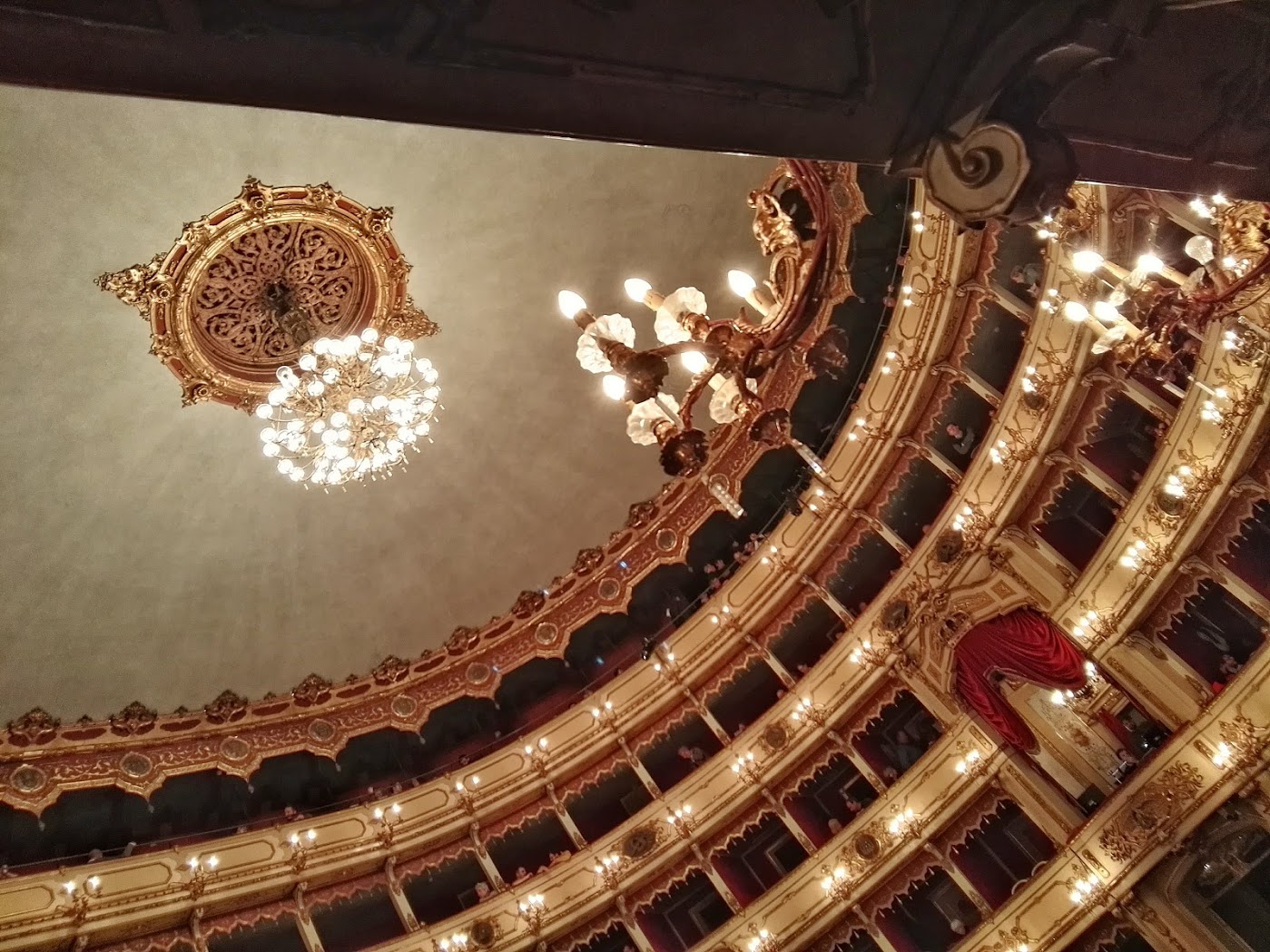 Another secret angle of the Theatre is our rehearsals room: mirrors walls, ballet barre and to the Opera production to prepare the exhibition while waiting for the stage’s rehearsals. The room is multifunctional and full of creative energy!

The orchestra pit is the space between the stage and the stalls, not visible, where the orchestra that plays live takes place. The name “mystisches abgrund” (mystical abyss) was coined by Richard Wagner, who for a long time worked on architectural characteristics of a theatre.
The A. Ponchielli Theatre, being a classical all’italiana theatre, is as well provided with an orchestra pit: it measures 22×5 meters and is opened and used during the Opera’s season, to the utmost use of 55 orchestral.

On the stage, before access to the dressing room hallway, there’s a fascinating and special place, where companies, musicians, dancers and directors leave inscriptions, objects, and emotions… this is the inscriptions corner, where the artist is always welcome!

It’s here that everything comes alive: the Theatre’s laboratory is where stagehands, technicians, props men work for theatre’s maintenance and to create, with their proper hand, some scenography and props during the Opera’s season setting up: a fantastic and a bit mysterious place, but always suggestive.